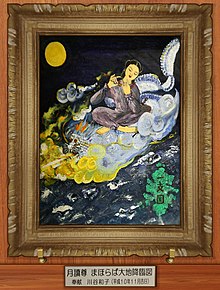 Tsukiyomi (Tsukiyomi-no mikoto ), penultimate child of Izanagi and brother of Amaterasu and Susa-no-o, was born when Izanagi washed out his right eye while purifying himself after his return from the Land of Yomi ( the Underworld). He was given the responsibility to rule the Heavens together with his sister, Amaterasu. According to the Nihonshoki (Japans second oldest Chronicle), Tsukiyomi is sent as envoy by his sister to visit the Kami of food Ukemochi-no-Kami. At the reception the goddess offered food to Tsukiyomi as is tradition. As she prepared the meal she faced the fields and spewed forth rice. Then she turned to the sea and disgorged fish, and finally turning to the land to bring forth game from her mouth. Although the meal was quite deliciously looking, Tsukiyomi was enraged at the seeming insult of producing the food from her mouth instead of preparing it by hand and killed the goddess. On his return to the heavens he told his sister of the incident, but instead of sympathising with him she banishes her brother from her palace to the night sky for good and vows never to lay eyes on him. Then she sends to see the corpse of Ukemochi-no-Kami. In the corpse various useful items are discovered: cattle and horses in her head; millet in forehead; silkworms on her eyebrows; rice in her belly and wheat, soybeans and red beans in her genitals. Those items were then given to the people to live on, emphasising the cycle of life and death, growth of sustenance that comes from decay.